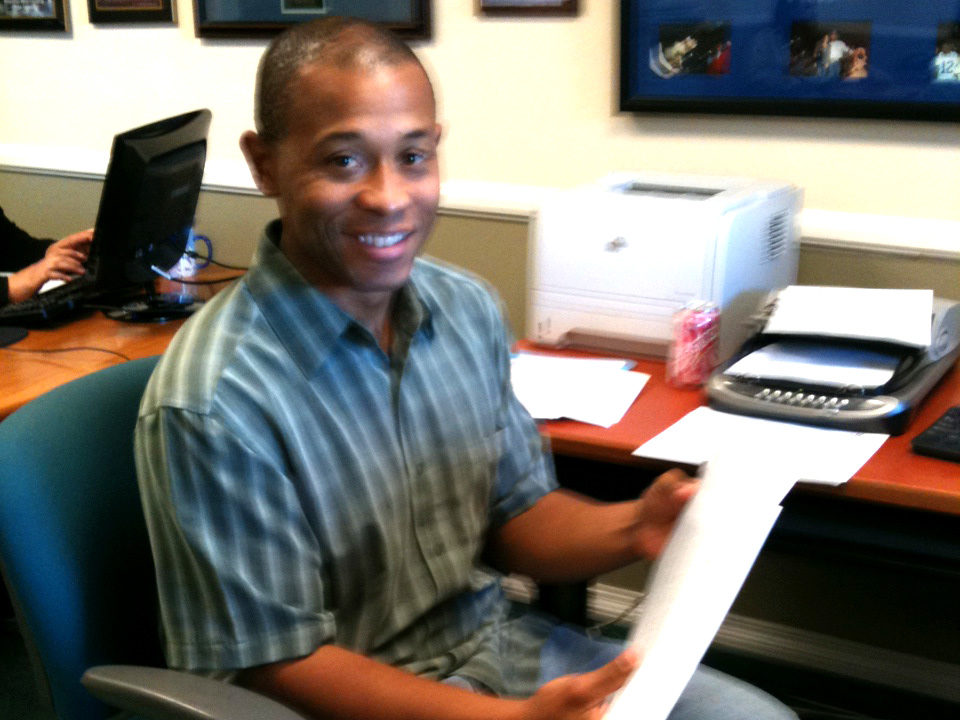 To all who see these present greeting,

Hope this is a familiar sound. If you are reading this then your life has been touched by such an amazing man that likes to help American HEROS. None other than Mr. Mike Talleda.

My hope is this letter today finds you well my name is Obom Bowen I was born in Guyana , South America, and enlisted in the Marine Corps on January 13, 1995. I attended boot camp at Marine Corps Recruit Depot, Parris Island, South Carolina, where I was meritoriously promoted to Private First Class. In June 1995, after completing training at the School of Infantry Private I was assigned the Military Occupational Specialty of 0351, Infantry Assault man, I then received orders to Golf Company, 2nd Battalion 3rd Marines, 3rd Marine Division, Kaneohe Bay, HI. From June 1995 to December 1998, I was promoted through the ranks to Corporal.

I held the billets of SMA W Gunner, Fire Team Leader, Squad Leader, and Section Leader.  I was deployed twice with 2nd Battalion 3rd Marines.  Where and participated in operations in Hawaii, Korea, China, and Thailand: Operation Cooperation from the sea and TITP/Cobra Gold. I then attended the Nuclear Chemical and Biological Warfare School; and also attained my Naturalization as a United States Citizen. In December 1998, shortly after that received orders to Weapons Training Battalion, Quantico VA. I attended the Corporals Leadership Course Class 7-99 where I received various accolades; I was also the Honor graduate.  From December 1998 to June 1999, I was promoted to the rank of Sergeant; I then attended Sergeants Course class 6-99, the Primary Marksmanship Instructor and Small Arm Weapons Instructor’s School, attaining the additional Military Occupational Specialty’s of 8531 and 8532.

I was promoted to the rank of Staff Sergeant October 2003, and held the billets of Battalion Color Sergeant, Section Leader, Platoon Sergeant And Platoon Commander. I Bowen attened the Jungle Leaders, Martial Arts Instructor, and Martial Arts Instructor Trainer Courses attaining the additional Military Occupational Specialty’s of 8551 and 8552. In October 2003, I was assigned to Fox Company, 2nd Battalion 3rd Marines, where I served as Weapons Platoon Sergeant and Range RSO/SNCOIC for Camp Schwab Rifle Range while deployed to Okinawa, Japan. I also attended the Career Course Class 2-04. I then received orders to 3rd Marines in Hawaii. Months later received orders to 3rd Marines in Hawaii. Months later received orders for Marine Security Guard School as a student Detachment Commander Class 1-05, where I was the Gung Ho/ hono graduate, there after I received orders as Detachment Commander at American Embassy Madrid Spain. I then got orders after Spain to 5th Marines Camp Pendleton California. Soon after we deployed to Iraq, Seven months into the deployment, I was injured 3 separate times.

As a result of my injuries I suffered a broken back, head trauma, partially paralyze for 9 months. I then had the laundry list of Disabilities, PTSD,TBI, LUMBAR DEGENERATIVE DISEASE, TINNITUS, COGNITIVE IMPAIRMENT. I think I will stop there you get the point RIGHT? Iwas married and now divorced I have two amazing daughters Iliavah (11) and Iliyhana (9). Currently I’m working part time with a company that provides access to the Justice System and Identity Theft. I now help Tonia Sargent the woman who helped me and so many others out runfor congress in 2012 as her campaign manager. Life hit me down pretty hard and I’m not staying down I was never one to have a victim mentality. I know I will be a better and productive person again no matter what. Here is what I do know for sure

“If you eant a thing bad enough to go out and fight for it,

to work day and night for it,

to give up your time, you peace and your sleep for it …

if all that you dream and scheme is about it,

and life seems useless and worthless without it…

and lose all your terror of the opposition for it. . .

if you simply go after that thing you want

with all of you capacity, strength and sagacity.

If neither cold, poverty, famine, nor gout,

Sickness nor pain, of body and brain,

Can keep you away from the thing that you want…

If dogged and grim you beseech and beset it,

with the help of God, you will get it!”