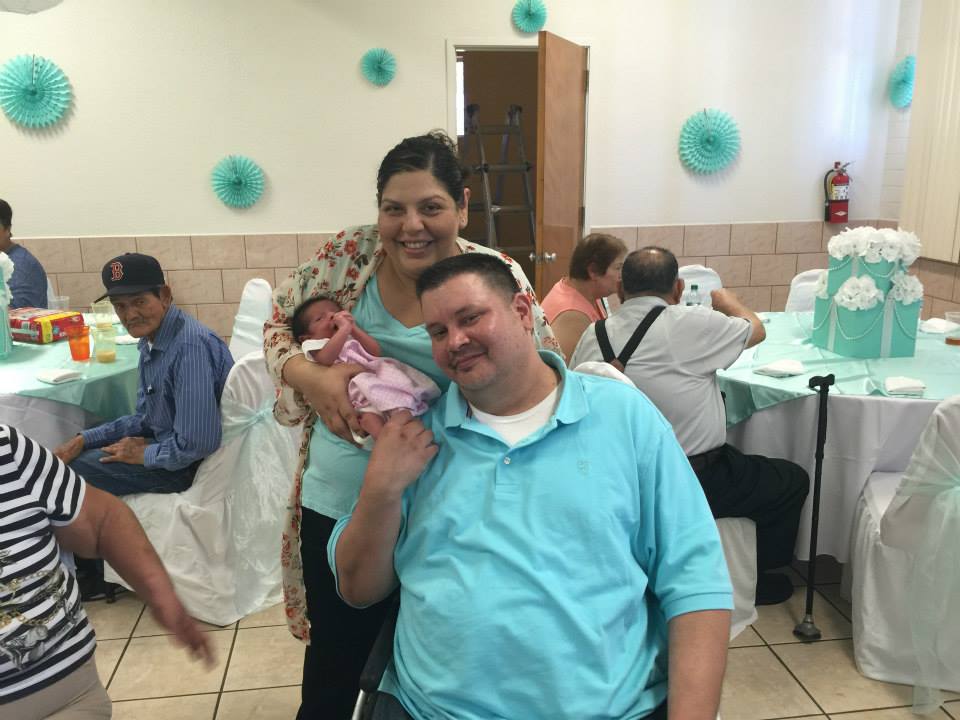 A baby girl for Rudy and Claudia. Congrats to the Saavedra and Guillen Family!

We spend a lot of time talking about the heroism and courage and selfless service to our Country from our Warriors, and they deserve every letter, every word and every story written about them, their sacrifice and their courage. I recently heard said “A Hero is no braver than the average person, they are just braver five minutes longer” Rudy Saavedra is one of those we talk about every now and then. He was among our first of our Combat Wounded Vets. I met him in early 2007 at the Long Beach VA at his Purple Heart ceremony. Along with Rudy receiving his Purple Heart, were Alroy Billiman, Felipe Adams and Sgt Major Jesse Acosta all became part of WHOA and our history. But now we’re going to talk about Rudy. Rudy is a decorated combat leader who is now a paraplegic as a result of a gunshot wound from a sniper in Iraq.

The other story, not so well known about, is my personal hero his mother Martha Saavedra- she also has a courage that goes way beyond the five minutes.  Martha was at Rudy’s bedside everyday while he was recovering from his wounds. She would spend the night (every night); at the hospital and from there would go to work in the morning. After work, she would go home and care for her husband, Rudy Saavedra Sr, a Vietnam Vet himself, and then return back to the hospital and spend the night near her son.  She spent every day there, every weekend there-This went on for months.

What endeared me so much to this family!!!– One day while I was visiting Rudy, I sat in on an interview that a local reporter was conducting.  The reporter’s questions were very negative and leaning in a way that could have easily gave Rudy the opportunity to turn on the military, his Country and his president. Questions such as,  “looking back on it now from where you sit (which was obviously from a wheel chair) was it worth it?” Those are the moments those extra five minutes come into play – from his wheelchair he said, “Ever since I was a little boy I wanted to be a soldier. I’m only sorry I don’t have anything else to give to the ARMY and if I had to do it all again, I would do it all the same” from that moment I when I felt the love for my combat wounded warriors and began in earnest down the path where I find myself today.

Martha is the quintessential example of what a mother’s love is all about. She showed me what a mother will do for her child. Even after Rudy was released to go home, he could not because his home was a tri- level lot and it wasn’t until a nonprofit, Rebuilding Together, installed two lifts that Rudy was able to go home. Later with the help of another great foundation, Independence Fund, we were able to obtain some amazing equipment to help Rudy with more freedom and mobility. We learned about collaboration. Through Independence Fund we were able to obtain the IBOTs system for all our spinal cord injured Vets. That was the beginning of collaboration with others to help our wounded Vets.

And now the best gift of all, after Claudia, is baby Victoria. It’s been a long, hard journey for Rudy, Claudia, and their families. I had the opportunity to attend the baby shower and meet Victoria. She came a little early and actually beat her baby shower. She now is the boss and sets the schedule.  We have a great affection for this family and I personally have the great respect for Martha Saavedra for educating and showing me the meaning of sacrifice early in our beginning – the sacrifice of a loved one; something most people are not aware of. Congratulation Rudy, Claudia, Martha and Welcome Victoria from all of us at WHOA. – Mike Talleda